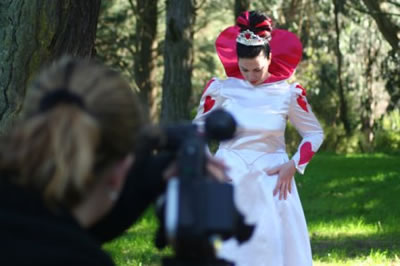 Defining cinépoetry as the convergence of cinema and poetry seems to suggest that it requires moving images based on textual poetry. However, this prompts many questions. Can non-moving text on screen be considered cinépoetry?

Or perhaps anything on screen should be considered “moving” through time/space in the course of progressive frames per second and advancing time code.

And can not the production and/or editing itself give birth to poetry without any roots in text at all? Is it even possible that an unplanned and undirected event captured and isolated by the video camera, without any editing or manipulation, might itself be considered poetry?

Attempts at detailed definition cause other problems that have confounded me in my own personal creative production of the genre. I collaborate with a poet here in San Francisco, LaDonna Witmer. In initial discussions, because she is the poet, I listened to her ideas for the visuals and was originally surprised that she did not envision the text on screen as I had. I struggled with this question, which I almost viewed as cinepoetic criteria, whether or not text must appear on screen. Because the visual interpretation is based on the textual form, I initially assumed the words of the poem would be on screen.

I also wondered if on-camera performance of the poem was necessary. Creatively, I felt it should be more than merely a poetry reading, but how much more? Should the poet be seen and heard at all?

CONTINUE TO NEXT SECTION>>> HISTORY OF CINEPOETRY