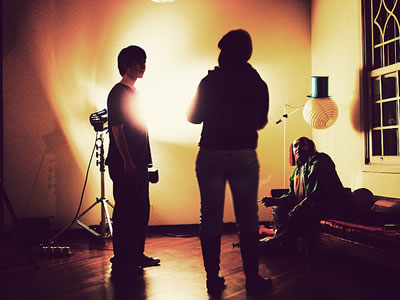 cinepoetry.com is a public work-in-progress that attempts to define an advancing genre. Each page of this site is like a short chapter.

This work is undertaken by one of the genre’s practitioners, Michelle M. Brown, a Professor of Broadcast & Electronic Media in San Mateo, CA.

Cinépoetry: Decoding a converged genre in the consumer-producer culture of the Internet

When seeking to define a genre that is the convergence of cinema and poetry, the task is complicated by this very environment in which the converged genre thrives.

In researching cinepoetry and what aesthetic commonalities can be identified in the genre, the Internet offers a rich interpretation created by the very people that we once referred to as the audience. The Internet also leads us to history and analysis of cinepoetry, revealing that it is an old genre enjoying an electronic reincarnation in the global public sphere of the free and open Internet. However, being that we live in an age in which the audience no longer passively consumes media, but also produces and distributes it, an emerging artistic genre that finds its main space online is also constantly evolving. Therefore, how do we recognize cinepoetry as such? Does its rapid online evolution render it indefinable? What cognitive challenges does cinepoetry present to our comprehension of convergence?

While particular aesthetic commonalities need to be identified, there are no definitive principles by which we recognize a production as “cinépoetry.”

Indeed, a dogmatic definition of cinépoetry is not necessary. Christophe Wall-Romana, Ph.D. French literature, states in his scholarly work “Mallarmé’s Cinepoetics: The Poem Uncoiled by the Cinématographe, 1893-98,” that cinepoetry can take many forms.

Neither the term nor the concept of cinepoetry are new. In fact, the term cinépoéme was first used by Romanian poet Benjamin Fondane in 1928 (Wall-Romana, p. 142). Yet, the form is being practiced in the 21st century and finds its greatest audience on the Internet.

Indeed, by now in the 21st century, we have well-established art forms that we easily identify whenever we are exposed to them. We immediately recognize dance, music, photography, film, sculpture, theatre, and puppetry when we see it and hear it. We even classify each of those art forms into various categories or genres, like jazz, ballet, realist, mystery, abstract, and drama. But how do we deal cognitively with the fusion of these art forms? Sometimes a piece of art is not so easy to classify. Think about this for a moment – how do you classify a convergence of theatre and photography? What do you call it? Now, take that further, how do we classify a convergence of genres? For example, can our brains understand the fusion of science fiction with jazz?

We willingly accept subjective evaluation of what is and is not “music” or “dance” or “poetry” and even “art” itself. Identification of cinépoetry will manifest upon recognition of a form as such. Therefore, awareness of cinepoetry as a genre is essential, but it will not advance without a basic understanding of its components, history, purpose, and current practice. Let us briefly examine cinépoetry as a genre at its roots.

In a most simplistic exposition, cinépoetry is a convergence of two art forms: cinema (moving images) and poetry (written text). This collaboration creates cinematic poetry. According to Wall-Romana, for early cinepoetry, the sole emphasis was on the image, to the extent that when synchronous sound on film arrived in 1929, the expansion of cinepoetry actually halted (p. 142).

Is the fusion of two art forms sufficient basis for a genre? Not quite. (continues on next page)

CONTINUE TO NEXT SECTION>>> GENRE